Everybody has a story. I'm a big believer in this. Most people think their story is boring, pointless, and just not worth telling. I would argue that they don't understand the value of their own story. I have a belief that I've been nurturing for a while, and that belief is that history as it is written in the history books was written by the conquerors, not the conquered. Or, to put it in less gruesome detail, it was written by the scholars and the academics, while the stories of those who actually lived through history have long since been forgotten.

We have Thomas Edison and Nikola Tesla. The history books praise Thomas Edison as the father of modern invention, and he may very well have been. But what about Tesla? He also lived during that time period and his inventions were incredible. His goal for mankind was far-reaching and, had he achieve it, would have been phenomenal.

New history is cropping up that tells a different story. Who was Tesla and who was Edison? And were they portrayed accurately, or was one portrayed as the failure while the other was painted as a hero? Who wrote the stories that we now believe portray these two men? I would love to read an autobiography of Nikola Tesla. I think that would be a phenomenal piece of work because it may shed new light on an old story.

What would be even better are stories written by the people that lived and worked with these two men. Those are the people that would have told their interpretation of the men, how they acted, how they responded to failure, what their upsets were, and what drove their passion forward. These people would have thought their stories were pointless, but in reality they would have been incredible works that we who live today could have read to get a true look into the lives of these men.

Everybody has a story. Everybody. The elderly have incredible stories. They've lived through wars, genocides, failures and successes in the countries they love, loss, heartache, growth, and triumph. Their lives may have seemed uneventful, but when you string that life into a story you see that they have something to share and incredible wisdom to impart.

Everybody has a story. The young have stories. They view life differently than the rest of us who have been smacked down a couple of times. They see beauty where we see mud, they feel vibrant and energetic while we spend half our lives trudging through exhaustion. Their world is very cut and dry. X = Y. It makes sense to them. Their stories can give us a different view on the world we live in.

Everybody has a story. The teenager dealing with the highs and lows of puberty and of peer pressure. The young soul trying to figure out where they stand in this world and where they're going to make an impact. They are risk-takers, often trying far more than we adults would ever want them to try, but learning from it nonetheless. These stories are worth hearing because we can get an inside look into their world and how life occurs for them. 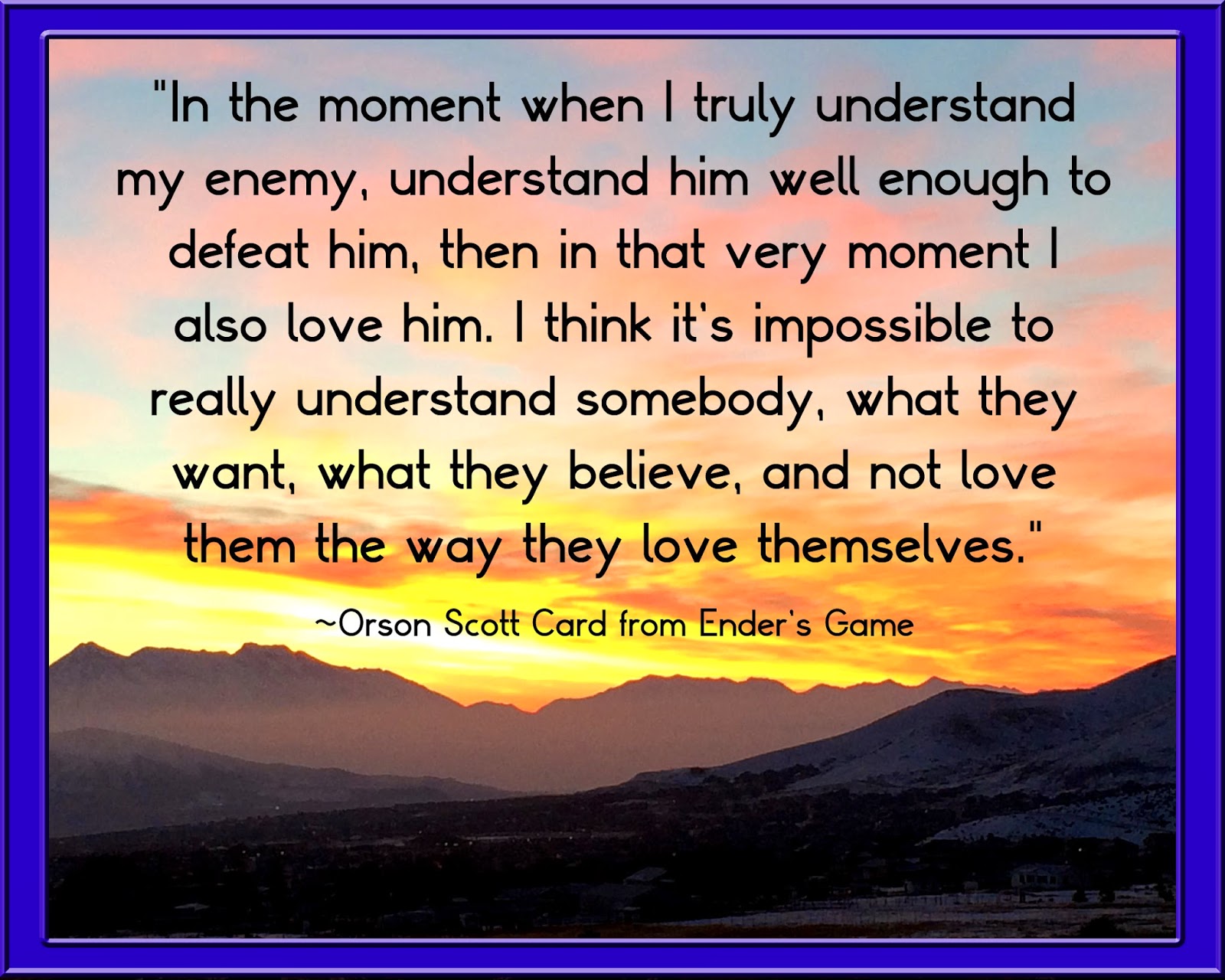 Everybody has a story. Regardless of your situation in life, whether you're rich or poor, young or old, from Brooklyn or California, Ireland or the Middle East. You have a story and it's beautiful because every story is a story of life. These stories are how we can truly see the world through the eyes of another. That is how compassion is born because, as Ender said in the novel Ender's game,

Our stories when told help other people truly understand who we are and when we understand people, we can't help but love them. So I ask you, what's your story? Have you considered that it's worth telling?

Email ThisBlogThis!Share to TwitterShare to FacebookShare to Pinterest
Labels: impacting humanity, recognizing your value, sharing your story, the story of life, writing

Hello! Welcome to the Quest and the Quill! You may be wondering what this blog is all about. Well, I will tell you. A few years ago I made a very important discovery about myself; I discovered that I love to write! I love love love it!

Since my discovery I've created huge goals for my life and learned what it is to be truly passionate about something. Passion is fuel for adventure, experience, and learning!

I'm also a mom of three amazing, adorable kids and wife to an incredible man. This means my life is always changing, always doing something different, and I'm always growing and learning, even when it feels like nothing is happening.

So the Quest and the Quill will be my experiences trying to balance the important things in my life; woven in to this story will be all the many wonderful things I learn about following your passion, whatever it may be.

So far my life has taken me down a path that's been full of unexpected discoveries (some good, some bad) and huge personal growth. My hope is that through my journey and this blog, somebody will learn something that will help them on their journey.

Welcome to the Quest and the Quill

The Quest and the Quill

Julianne
Hi. My name is Julie and I'm glad you're here. If you were to meet me on the street, you'd quickly learn that I'm friendly, outgoing, and sometimes even fun. But if you were to have a conversation with me, you'd discover that I'm passionate about a lot of things, and I'm a fan of miracles, which I believe we are surrounded with daily. I love to photograph births. I think it's a gift to be able to share in those moments with people. I love to write. I believe writing can change the world, and so I write, hoping to impact a life somewhere. And I love to support people as they rediscover themselves and go for their dreams. As such, I'm a photographer, a writer, and a personal coach. I work in all three realms and I love it! I'm so glad you found me!

Are you a freelance writer? I am. I write articles about anything and everything, but you can write articles all day long and never make a dime if you don't sell them. This website ~ constant content ~ is a great place for freelance writers to sell their articles. Many many people come to this site looking to buy content for their own websites because they are professional and on top of things. I've looked at quite a few sites trying to sell my work and this site is by far the best that I've found. Check it out!